Sir Richard Branson at NRF: Are retailers looking outside the box?

“People who own retail stores should not think of only being retailers, they need to be entrepreneurial and spin off businesses off the back of the retailer to make them money to help the retail stores survive.”  That’s according to Sir Richard Branson, founder of Virgin Group, who spoke on Monday at an NRF keynote session, “Undying Brand Engagement in an Age of Continuous Disruption and Reinvention.”

The Virgin empire now extends to over 400 businesses including soft drinks, airlines and a soon-to-launch first commercial space line. But the business started in retail with the Virgin Megastores record chain.

In 2001, the iPod was launched and the company soon “saw the writing was on the wall on music retailing.” But Sir Branson recognized “we don’t have to stay a retailer just because we are a retailer,” and explored which products were selling well at the Virgin Megastore chain. The company moved into mobile phones and video games, both in the early stages of their growth cycle, and realized revenues “much, much bigger than our retail stores ever could have been.”

This is an excerpt only from this full article on RetailWire.com. 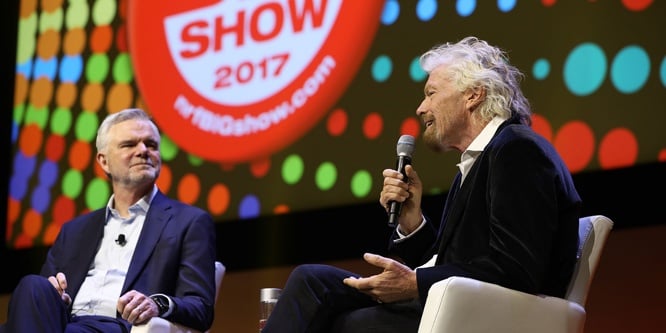