Out of Office: A Q&A with Annie Dlugokecki, Yoga Instructor

Annie Dlugokecki, Leasing Agent in Regency's Raleigh office, has been practicing yoga for years. She has since completed a 200-hour yoga instructor training program through CorePower Yoga at our shopping center, Cameron Village. Occasionally the Raleigh office attends her classes and she's even taught a few classes after work in the office. 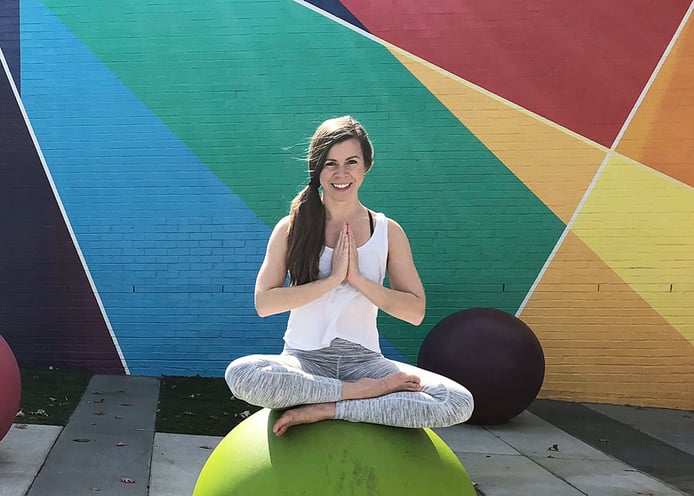 RC: How long have you been practicing yoga?
AD: I went to my first yoga class when I was in high school, and then I practiced off and on for many years. I have been practicing consistently for the last five years or so. It’s a daily part of my life, and it’s been empowering to realize that my practice follows me everywhere I go. While leggings and a quiet space can make yoga more comfortable, all that’s really required is breath. It’s also a gift to be able to share my practice with friends, especially when we’re traveling.

RC: What drew you to yoga initially?
AD: I have always loved to move, or perhaps it’s more appropriate to say that I’ve always needed to move to be a kind, functioning human. (This started with learning to turn the TV on when I was three years old so I could do Mousercise, the '80s Disney Channel workout show for kids, before my parents woke up.) When I was in high school and college, I ran a lot. Yoga was a great way for me to recover from long runs. Over time, I realized how broad and deep the tradition of yoga is; there’s always more to learn, and the asanas (physical poses) are just one component of that. 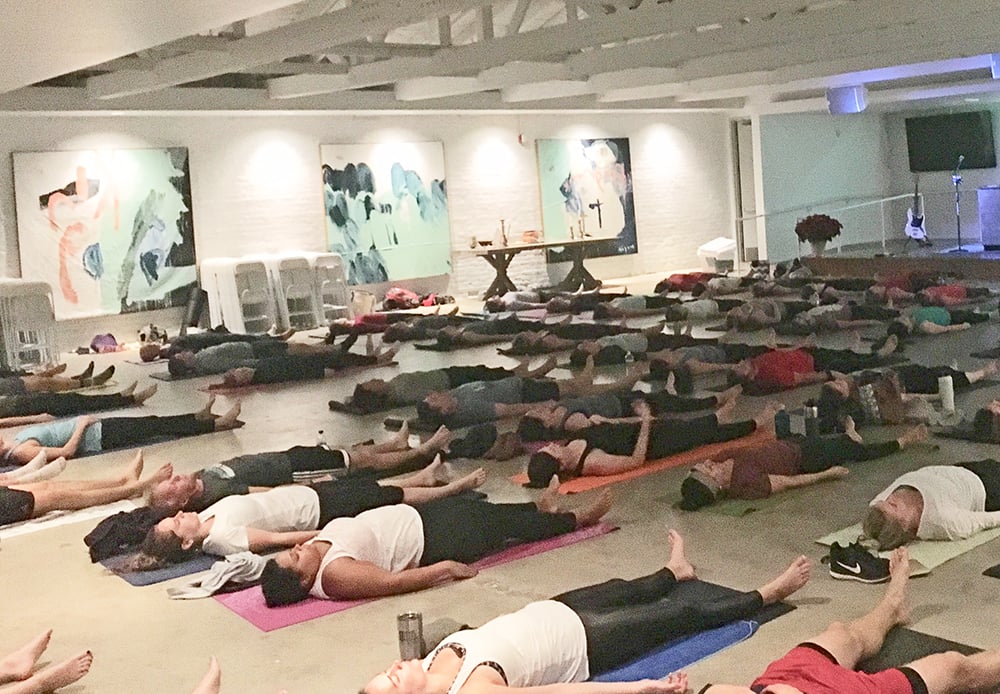 RC: And now you're also a yoga instructor — tell us about that.
AD: I started teaching yoga last spring after I completed my 200-hour teacher training at CorePower Yoga at Cameron Village. At first, I just started teaching wherever, and whenever, I could — showing up at friends’ houses with an extra mat (and a sequence in mind) or asking a co-worker, Amanda Craddock, in the Raleigh office if I could teach classes after work. By the fall, I was on the schedule at a local studio.

RC: Where do you teach/how often/what kind of class(es)? How often do you practice yoga outside of teaching?
AD: Right now I am teaching at a great local studio called Open Door Yoga at least once per week, sometimes more if my schedule allows it. I have led several different series as well — with corporate groups, at my church, etc. While my training was in power vinyasa, I prefer to teach a more gentle flow. I think it’s important that folks have time to fully arrive on their mats, calm down, and then move in a way that’s wise for them. When you go too fast, you lose some of that. I also love seeing diversity in my classes, so designing sequences that are accessible for lots of bodies and creating an inclusive environment are very important to me. 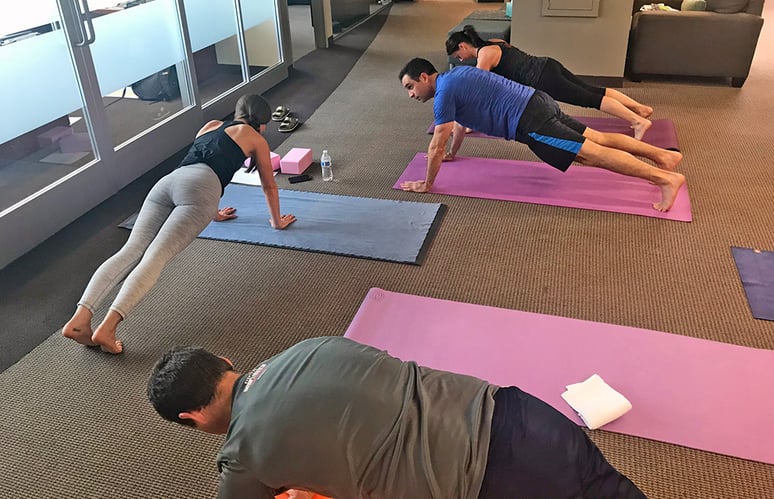 RC: We hear you also teach the Raleigh office (pictured above) occasionally...
AD: Yes! I have taught classes here in the office, and it’s a lot of fun. I know I can always count on Kristi, Amanda, Paul, and Caitlin to be up for some down dog after work. My colleagues have also come to some of the classes I’ve led outside the office, which has been really nice too.

RC: What is something you would tell beginners wanting to try, or get into, yoga?
AD: Don’t think too hard about it. Don’t look at too many pictures of other people doing it. Just get started in whatever way requires the least willpower — for some people I think that means starting out with a home practice (the app Down Dog is great) and for others a studio environment with a live teacher is easiest. Then, just keep doing it. A yoga practice has far less to do with the shapes your body can make and far more to do with consistently showing up on your mat — breathing, moving, day after day.