Starbucks’ wildly popular Unicorn Frappucino craze came and went in late April. Although the concoction was laden with sugar — 59 grams for a grande, and 76 grams for venti — many stores could not fulfill orders by day three of the promotion. There remains much to glean from this five-day retail sensation.

What’s in a name?

‘Unicorn Frappuccino’ is a fun, playful and intriguing name. Coupled with bright colors and sparkling visual appeal (fans plastered photos of their coveted drinks across social media), the brand made its presence known in grand fashion. Shop Girl Anonymous put it this way: “Half of us will buy anything that says unicorn, no questions asked.”

The aesthetic appeal of the product surely contributed to its viral status, making for vibrant pics on social media and happy faces in Starbucks coffee shops. Changing color and flavor while a person drank it, the Unicorn Frappuccino swirled together exciting colors of its mango syrup, sour blue drizzle, sweet powder, and vanilla whipped cream. In an Emerald Insight study titled “Impact of Color on Marketing,” researchers found that up to 90% of snap judgments made about products can be based on color alone, depending on the product. When it comes to marketing, how a product looks, or visually appeals, to customers can boost a product’s success in the marketplace.

Creating a sense of urgency remains a fruitful marketing strategy, one that caused Starbucks more demand than they may have anticipated. An Alabama reporter cited that most locations had already sold out of the drink by April 21, two days prior to the end of the advertised promotion. An offshoot of this lesson is that while the “limited time” phrase can drive customers to the door, the “while supplies last” can be a measure worth checking twice when implementing a special promotion.

Marketwatch reported that Starbucks executives say the Unicorn Frappuccino was an “Instagrammable” success that drove significant traffic, providing a springboard for future special marketing endeavors. Starbucks went directly to the customer to leverage their marketing savvy in the form of social media influence. Before the unicorn leaped from the rainbow, Starbucks leaked photos on Reddit, a social news aggregation, web content rating, and discussion website. This slow leak intentionally positioned consumers to be the first to spread the news, according to PR Specialist Heather DeSantis (Source: Forbes)

Go with the flow.

In her interview with Forbes, DeSantis also made a strong connection between the timing of the drink’s launch and the celebration of National Unicorn Day, which was a few weeks prior. No doubt going with the flow – that is, the flood of attention – of consumer appeal, generational throwbacks, and mesmerizing fantasia, Starbucks introduced the unicorn product to an already primed marketplace. DeSantis explains, “It’s human nature to be drawn to something that has magical powers, and with Apple’s recent launch of a wildly popular unicorn emoji, this obsession from the 1980s is back in a big way.” 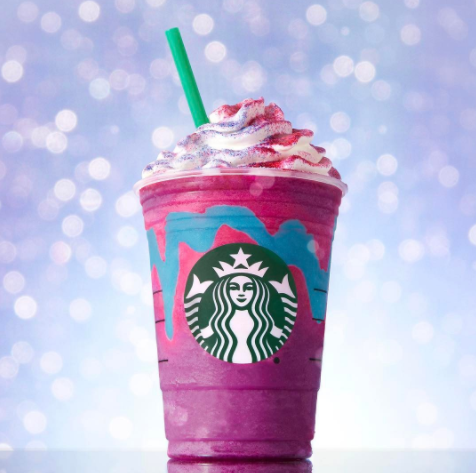