Why Poke is the Next Big Thing in Fast Casual

Proof positive that poke has finally evolved from fad to trend: Celebrities are hungry for the stuff. Actress Kate Hudson has Postmates deliver fresh poke from Santa Monica’s Sweetfin Poke to her home. Meanwhile, Seth Rogen, Megan Fox, Howie Mandel, and Barry Bonds are regulars at the restaurant, located just a few blocks from the beach.

Another indication poke has arrived: Fast casuals like Sweetfin are springing up all over the country and serving the dish.

Poke (pronounced poh-KAY) is a raw, marinated fish salad that originated in Hawaii as a snack or appetizer made from leftover fish. Recently, though, it’s evolved into a popular entrée that’s easily customizable and eaten on the go. The dish includes raw, sushi-grade fish that’s typically combined with condiments like salt, pepper, and soy sauce, then mixed in a bowl with eclectic toppings.

In the Los Angeles area alone, at least 50 poke restaurants have opened in the past year, estimates Seth Cohen, Sweetfin’s cofounder.

This is an excerpt from this full article posted on QSRmagazine.com. 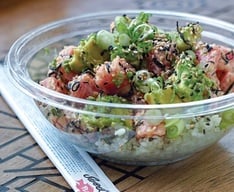