“What do you mean? You didn’t park in the center?!” started Gregg Sadowsky, Senior Vice President, Senior Market Officer out of Regency Centers’ San Diego office, “We have the best parking in the area! Which way did you come in from?” 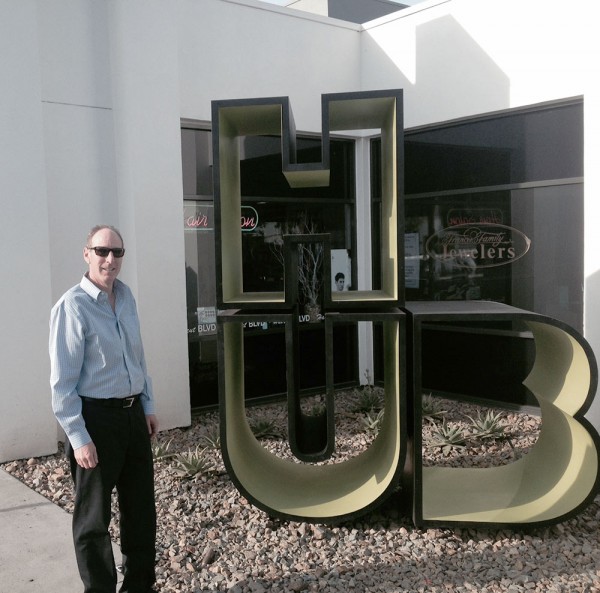 I pointed toward the direction of what I thought was an extremely lucky parking grab given the high volume of traffic encircling The Hub, formerly known as Uptown District.

“Aw, naw, you gotta park in the center next time, it’s great here! Did you see the mural we did on the hardscape at the corner?” he asked enthusiastically. The artwork Gregg was referencing was easy to spot, and a visual standout in the vibrant and bustling enclave of tenants and residential occupants.

“Come on, let me show you what we got here,” Gregg said as he began walking, not even checking to make sure that Emily Ford, Senior Marketing Manager, and I were following. “I love these,” he continued, pointing to what looked to be a large set of man-made trees with some metal platforms attached to the center. These installations complemented a center that is already covered in unique sculptures, paintings, and architectural additions. Although many of the designs stopped me in my tracks, they seemed as natural as the Starbucks umbrellas hovering over the familiar black tables to the shoppers walking around.

Architecture has been a large focus at the center as a part of the site’s brand. The surrounding community has a very strong personality and lifestyle, and the San Diego team was fortunate to acquire the talents of local architect Graham Downes before his unfortunate passing. Downes was infamous for having a unique and signature style that you could see in many locations in the San Diego area.

“See all of this?” he asked, motioning down a small but busy street, not waiting for a response, “All of this is ours. All of those places on the second floor are ours as well. So, when people talk about mixed-use, what better example do you need?” The residential units he was referring to sat on top of the Trader Joe’s that, as Gregg put it:

“They’re killing it. Great tenant. Great location for them. They have people going in and out of there all day.”

Gregg’s excitement and passion for this center is echoed on the walls and paint. One of the most eye-catching pieces is one called The Three Kings, and sits on the back parking area of Ralph’s. Three giant, multicolored faces stare directly through the windshields of those brave enough to make eye contact with the bearded behemoths. However, it’s hard to know which of these faces to look at first, especially considering two of them have a third eye sitting in the middle of their foreheads. There is no question about how attention grabbing it is, and Gregg seemed to read my mind as he commented:

I never remembered hearing about Andy Warhol or Mark Rothko (Google is your friend here if you’re unfamiliar) doing pieces for something as commonplace as a shopping center, but that same feeling of visual experimentation flowed through the walls of this site. In fact, the art seemed to be a direct reflection of the eccentric group of shoppers that were dwelling and moving throughout the palm trees and archways of The Hub. But it’s not just the shoppers that make up the cast of characters that are The Hub; the tenants bring their own unique flavor to the mix – in some cases, literally.

“This guy is so cool,” Gregg started, talking about the owner of Napizza, a local pizzeria concept with one of the most aesthetically pleasing environments I’ve seen in a retail space. “…Straight from Italy…used to be a surfer over there. They do such cool stuff here, and the people LOVE them.”

Next, we walked into Ralph’s grocery store.

“You see the floors here?” Gregg pointed to what was obviously some on-going construction. “They see that we’re upgrading and updating this center, so they’re following suit. They want to make sure that they’re store looks as good as the center does. Look at all of these people, at this time of day!”

I checked my watch to make a quick measurement of where the big and little hand were sitting, but before I could do the math Gregg answered for me:

“It’s three in the afternoon! Three o’clock on a Friday and there’s people all over the place. They run a good operation here.”

It wasn’t just the tenants that were bringing in a crowd. The entire atmosphere and design seemed to be reflection of the unique demographics that surrounded the center. The color schemes, the standing art pieces, and the architecture – it all just seemed to fit. A lot of this is in part to the work of renowned San Diego architect, Graham Downes.

Graham’s designs have had a noticeable impact and added flavor to the San Diego area for over 15 years. This was an artist who could draw a building on the back of a napkin in an industry that was constantly becoming more reliant on computers to create concepts. Places like Tower 23, Hard Rock Hotel San Diego, Basic, Chive, and Hotel Palomar are great examples of his work in the area.

He provided such a presence to every project and person he worked with that there is even a Facebook group comprised of up and coming young designers who have worked with Downes. The “Once a Blokhead, Always a Blokhead” group, is taken from the name of his architecture firm’s building, “Blokhaus.” Much of Graham’s work has been credited for taking San Diego on a new visual path and identity. Tragically, Graham’s life was cut short, and The Hub is the last project he worked on before his death.

The personality and energy that accompanied the man during his life is well preserved at The Hub. As we walked (to keep up) with Gregg he continued to talk about the history of the center; where people cut through the parking garage; the walking path that connects the historic neighborhood directly to the new tenant spaces; the exciting new tenants they have coming in, and his plans for the future. It became very clear that Downes’ designs and Sadowsky’s energy have been a perfect fit for each other at the property. “I’ll make it easy for you,” he said for the third time as he gave us directions to Balboa Mesa, a neighboring center that we had a grand reopening event planned. Making it easier definitely seemed to be a mindset that has been repeated over and over at The Hub. Not to suggest that the work here has been simple, by any means. More so that the all of the hard work that has gone into the site has been designed to make it easier for the retailers and consumers to create that unique touch-point, while still maintaining an individual culture and brand.

Want to see more of The Hub? Check out the mural making-of videos and some of our social media posts below: