Food is the starting point for how we communicate with other cultures. This statement embodies the philosophy of a recent cultural mission trip to Vietnam co-led by Seattle chef Thoa Nguyen. Nguyen owns three area restaurants, including Chinoise Sushi Bar & Asian Grill at Grand Ridge Plaza in Issaquah, WA. She also battled celebrity chef Bobby Flay on The Food Network and won during season four of 'Beat Bobby Flay.’ Her specialty is Pan Pacific cuisine that merges food cultures. Under the banner of citizen diplomacy, Nguyen explored Vietnamese food with a group of Northwest chefs — but the trip wasn’t solely about food. Hosted by PeaceTrees Vietnam, a humanitarian demining organization based in Seattle, WA, their mission was to learn the dangers of unexploded landmines and bombs faced daily by Vietnamese families in Central Vietnam.

“You could see the wheels turning in each chef’s mind as we visited markets and met farmers, sampling produce that is unknown in the U.S.,” explains Nguyen. “It was inspiring to learn the story of Pacific Basin Spice Company, which produces some of the finest cinnamon (cassia) in the world. It’s grows in cinnamon forests on small farms in a remote Northwest corner of Vietnam. Families have been cultivating these forests for more than 400 years, but can now prosper from its sale. Pacific Basin was the first company to export ‘the prized champagne of cinnamon’ from Vietnam after the normalization of U.S.-Vietnam relations. Today, it supplies brands like McCormick’s, Whole Foods Market and Costco.”

In Saigon (Ho Chi Minh City), the chefs sampled vegetarian renditions of popular Vietnamese dishes, including dipping sauces. These vegetarian sauces are among the dishes that Nguyen wants to introduce at her Seattle-area restaurants due to the exquisite taste and healthy ingredients — two factors that resonate strongly with Northwest foodies.

At the Vietnam Women's Union

The chefs also toured local schools and visited a kindergarten in a village that was once impacted by landmines, helping to plant trees on land that’s safe due to the efforts of PeaceTrees Vietnam.

“One of my favorite moments on the trip was at the kindergarten,” recalls Nguyen. “The children sang for the chefs, and then the chefs spontaneously sang back with renditions of ‘Itsy Bitsy Spider’ and ‘Hokey Pokey’—they were a hit.”

While the chefs had the opportunity to dine at five-star restaurants, the best meal of their trip was classic street food: banh xeo (crepes) in a Can Tho village. “We wanted to have an adventure and asked a guide to take us to his favorite local place,” explains Nguyen. “The key for food stalls is to make just one dish and to make it extremely well. Banh xeo are sizzling crepes, but savory, not sweet. We went to a small alley, accessible to pedestrians only, and enjoyed incredible meal.” 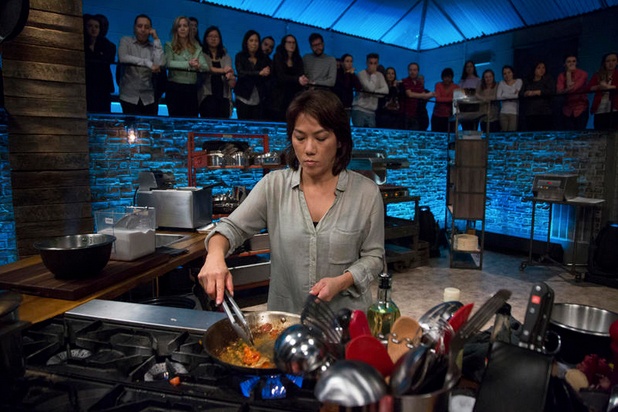