Out of Office: A Q&A with Regency's Star Steppers

Three members of Regency's corporate Jacksonville office were named some of the top 'steppers' in a company-wide step challenge. Participants — 180 employees and 26 spouses — wore tracking devices, such as a FitBit or an Apple Watch, to track steps and sync them to a tracking system for four weeks. All employees (and participating spouses) who logged 100,000 steps during the challenge received 40 wellness points. Alex Johnston, Manager, Financial Systems; Matt Mueller, Manager, Internal Audit; and Yuriy Yatsishin, Property Accountant, finished with 563,533, 502,500 and 466,136 steps, respectively. 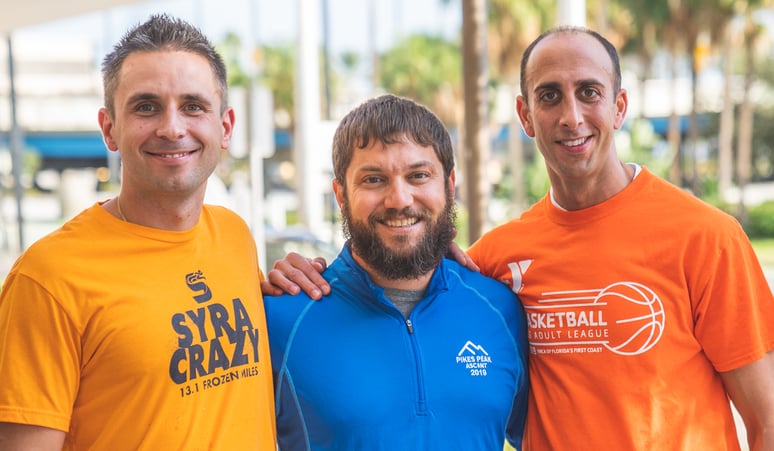 RC: How do you each typically stay active?
YY: My fitness tracker helps me a lot to stay active. From boot camps and treadmill jogs to parking in the very end of the parking lot to walk a longer distance
AJ: After graduating college, I got into running. Mostly around the neighborhood to burn a few calories and reduce stress. After several years of running with no real goals, I started to take it a bit more serious, focusing on fitness and outdoors. In addition to running on roads and trails, as any parent of younger children can attest it’s also easy to stay active keeping up with a 9 and 5 year old.
MM: I’m either getting in a morning run or workout. My runs typically are eight miles, although I drop it to five on my more “lazy” mornings. I also get in about three to four miles during my workouts. I’ve been getting back into basketball which is another way to rack up some steps. Now full disclosure and being completely honest, I can’t say I “enjoy” running, at least not in the same manner as others. I actually enjoy the effects of running, one of which is my appetite. I can indulge in thoughtful consumption knowing I can burn the guilt off in a little over an hour.

RC: How did you push yourself during this challenge?
YY: I set a goal of exercising and walking more than I usually do and stuck to that plan. And it worked!
AJ: Since focusing on my running and training fitness, I’ve become really interested in the mind/body connection. Really pushing myself to see how far I can go physically and mentally. Whether training or competing, there is always an opportunity to push yourself. Finding the outer limits of what you thought you were capable of and then pushing past them is so rewarding and promotes growth on all levels, physical, mental, spiritual. That’s what distance running continuously does for me, challenges me to continue putting forth an effort that will give back more than last time. Then extrapolate these same concepts to life and you’ve got some serious lessons here. When training gets hard, you push harder. Don’t go out too fast, or you’ll burn out. You get out what you put in. Sounds kind of hokey, but these are all lessons distance running has taught me.
MM: I went seven days instead of six — seriously — and the gap between Alex and I still expanded! After the first week of the challenge, Mr. Johnston dropped by my desk and we were chit-chatting about the competition, and he also said he was going out to Colorado that weekend. However, he failed to mention the reason he was going out there — little did I know that it was to compete in some half-marathon mountain climbing adventure. Next thing I know, the following Monday I was in sixth or seventh place and I thought to myself, “THIS IS ERRONEOUS!” I then committed myself to not taking a day off for the rest of the event.

RC: Would you consider yourself competitive?
YY: Somewhat, especially considering exercising benefits me as well. So that makes it a sweet deal!
AJ: Not really. That’s one aspect of distance running I love. Everyone has their own capabilities and goals. So, while you may be running in a “race” and you may come in 342nd place, if you had a good day and set a PR (personal record), then that was a fantastic day for you.
MM: I’m competitive with myself, meaning I’m critical of my performance. Now don’t get me wrong, I don’t enjoy being on the losing end in competition whatever it may be; however, I definitely keep things in perspective and don’t get too weekend warriorish out there. I also must point out that this was a step challenge and not a mile challenge. My steps are a little larger compared to most, so I’m curious as to how many miles Mr. Johnston covered in all his steps.

RC: Did you grow up playing a sport? Which one(s)?
YY: I didn't.
AJ: I grew up playing soccer until college. Then I continued playing indoor soccer after college for a few years.
MM: I primarily played basketball and football. My sixth grade football team won the city championship. That’s about the pinnacle of my athletic career.

RC: We are wondering — how did you end up taking the lead, Alex?
AJ: The step challenge happened to fall during a time that I had signed up for a half marathon. During a recent trip to Denver for business (JD Edwards conference and Denver Office Visit to perform IT Training), I was able to participate in the Pikes Peak Ascent. It’s a half marathon that starts in Manitou Springs, CO, and follows the Barr Trail up to the summit of Pike’s Peak. It is about 13.3ish miles with around 7800’ ft of elevation gain; Manitou Springs 6500 ft elevation to Pike’s Peak Summit 14,100 ft. It is called America’s Challenge due to the terrain and conditions and is America’s 3rd oldest marathon. After finishing the half this year, I’ll be going back to run the full marathon next year. Would enjoy the company if anyone is interested! 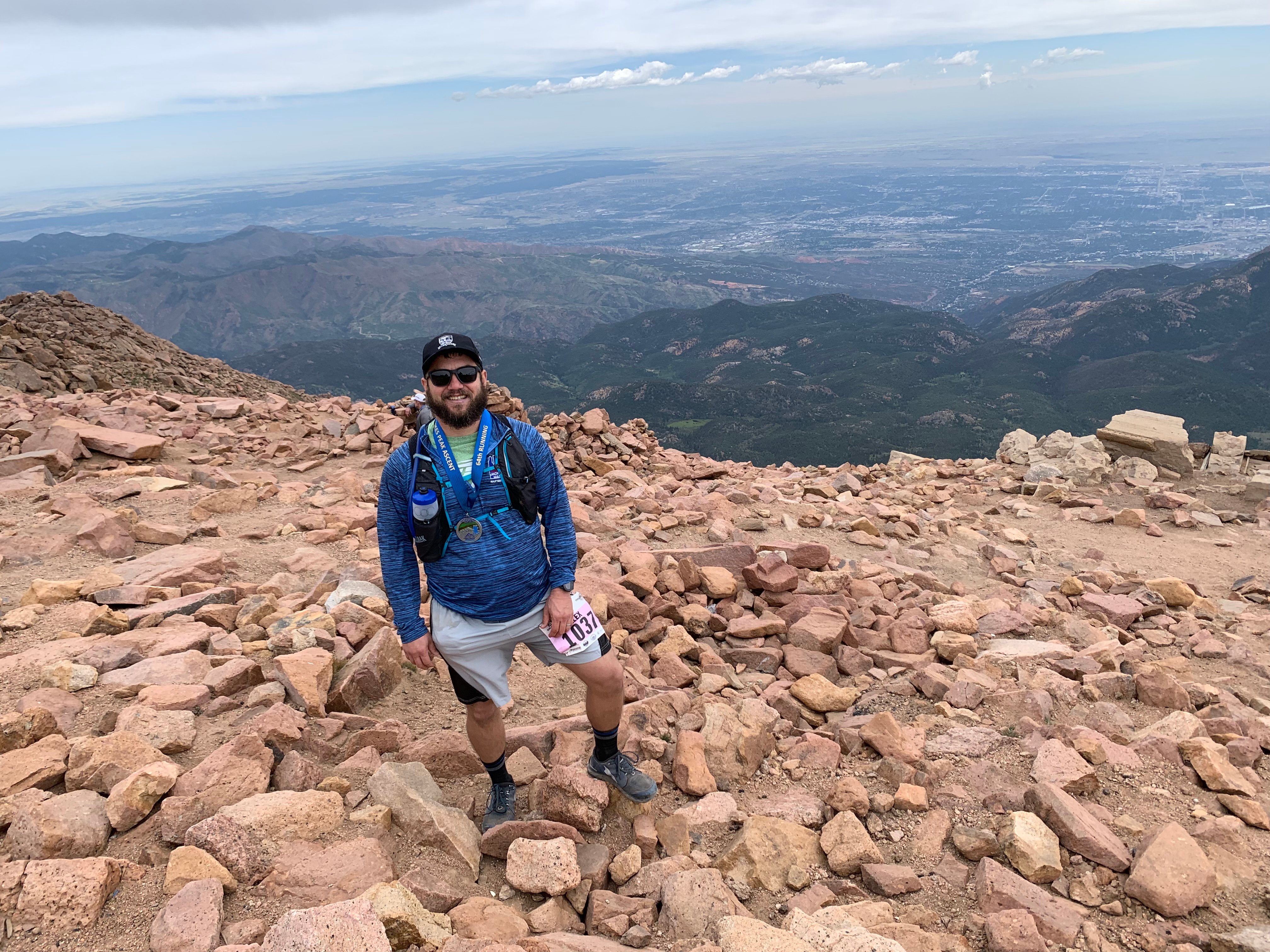 Mueller's shoes after the challenge — he wore holes in the sides!